My life is much different now, not just because I have a baby, but in EVERY aspect. I graduated in 2005 from college with a Bachelor of Arts in Political Science and a minor in English Liturature (which I probably shouldn’t admit given the numerous spelling and grammatical errors I’m sure I have strewn throughout this blog) and was convinced I’d get involved in politics, get a job with the government, or work for an NGO. Nope! With no job prospects, I moved back in with my parents and started applying to basically every company with a job opening.

My father was in Information Technology and convinced me, since I’m a lot like him and he did not have a computer related degree either, that it would be the perfect career path for me.  It did not work out for me right away, but, after job hopping through two companies, I eventually landed a data analyst position with Informatica. Within about a month, once I completed my training, I was put on my first project which is where I met my husband.

So just to put this into perspective: I moved in with my parents for about six months where I commuted to one job, then I moved to New York City to work for a different company there for another six months, and then I started working for the Data Warehousing company which had me traveling to the Philadelphia vicinity. I then stayed with that company for two years with a brief, one month intermission after about one year to hop back to the company I worked for when I first graduated, which did not work out.  When I returned to Informatica they placed me on a project out west, which  is how I ended up moving us (my, then, fiance and me) there.  We put an offer on a house in a weekend visit and a few months later moved across the country and Andy had a new job.  Within a few months my boss left and I job hopped once again to follow him and got to work from home. That is when we decided to have a baby and a year later I decided I needed to stay home with him. 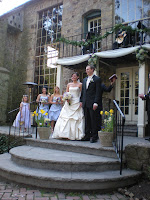 I just thought it would be fun to share just how much has changed in a relatively short period of time! I hope you’ve enjoyed the ride! 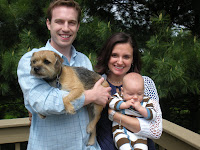 If you enjoyed this post, please consider leaving a comment or subscribing to the RSS feed to have future articles delivered to your feed reader.
0 Shares
« Travel
Discipline, where have you gone? »