>My friend D is Diana from Hormonal Imbalances and her guest post below is the completion of a story she started a little over a month ago with two posts: Make new friends, but keep the old – 1 and Friends, or lack thereof – 2. I’m SO excited that she decided to finish this post on my blog! Enjoy!
***********************************************************************
I finally decided on a college and left – placed with a roommate who at 17 was a spoiled only child and decided it was her life mission to make me miserable. After 3 weeks we stopped talking to each other. With beds only feet apart, it got difficult. She was beyond strange – staring at me at night while I slept, hanging up millions of tiny lights so that our room was never dark, listening to the fuzzy sound on the radio in the morning instead of just.picking.a.freaking.channel. She would talk about me on the phone to her friends, cry and yell at me about why I was so awful to her, and brought boys back to our room without checking to see if it was ok with me first. She finally moved out to her own private room her dad paid for. I wasn’t sorry to see her go.

However, in all of that I had my friends next door to me that were amazing. I also had my wonderful sorority – Alpha Sigma Alpha – and my Big was a total sweetheart. I found a way to escape my room by being at the sorority house and their events.

Jen came back to visit and I got to see her, but it was different. She had a career and a purpose, and I was still wondering what on earth I was going to do with myself. Engaged to Sam, he was overseas for another year. I felt lost, out of place at a partying college and alone at home.

Sam came home for 2 weeks while serving in Okinawa, and we got married. I hadn’t seen him in 9 months, and it was 9 more before we would see each other again. In the meantime, I traveled to India and Singapore, worked here and there, and finally moved out to California where I worked as a nanny. I didn’t have any friends my age there – but working 60 hours a week didn’t allow for it either.

Several years later, upon realizing we would never be able to own a home in SoCal, Sam and I moved back to the small town we both had grown up in. We had a home built – which was beyond fun. A few months later, my mom mentioned something about my friend, “E” looking to move to the city a few hours away from us. Having not seen her for 16 years, I was apprehensive of how meeting her again would go. After all, so far my friendship record was rather pitiful.

She went to church one Sunday and I missed her – Sam and I had gone off that morning. My dad called and put her on the phone, and we chatted briefly and said we would have to get together again. I figured it would be a while.

A few weeks later she said she was coming back down with her fiancée and sister. I remember being so incredibly nervous as I waited in the church pew for her. I realized that 16 years ago, that had been one of the last times we had been together – at my dad’s church in New Jersey. I started to tear up a little. When she finally got there, she sat and waved at me since church had just started. I thought she was so pretty, so grown up and I couldn’t believe how many memories suddenly hit me.

We traveled up to where they were living, and they came to see us so often that I think we could have driven it with our eyes closed. Wait – maybe just them. Sam and I get lost just backing out of the driveway. 🙂 Then we got pregnant around the same time. I was ecstatic as that was something I had always, always wanted in my life. A friend that was pregnant with me. No matter how long it went in between us seeing each other, it was like no time had passed. She had her son 7 weeks after I had Bella.

Now it’s been 2 ½ years since we reconnected. Sam thinks the world of her husband, who is such a great guy, and I love Erika to death. It’s one of those friendships that I feel sure will last forever. We also plan on our children getting married – or at least making a real attempt at it. 😛 We are moving to the city where they live when our house sells, and even though they might have to leave, I’ll be happy just to get to spend a few months with her and our babies. 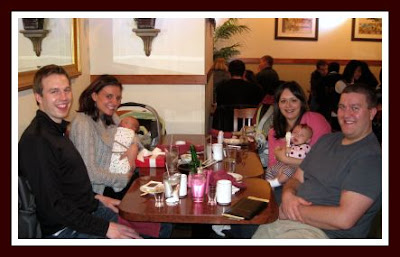 As for the rest of it? Jen and I found each other on Facebook and at times her posts make me laugh till my sides hurt. She is a wonderful mom, raising two young kids alone and going to school full time while her husband serves overseas. It’s wonderful to have two of the most important girlfriends in my life back, and to share my life as a wife and mom with them. I love them both dearly no matter how far apart we are.

If you enjoyed this post, please consider leaving a comment or subscribing to the RSS feed to have future articles delivered to your feed reader.
0 Shares
« Special Memorial Day Mamma Monday
What a tragedy »