I went for a jog today (go me!) and I came to a realization as my thoughts wandered freely for a whole TWENTY minutes 🙂  This “revelation” is not all that profound, but it has escaped my attention until today.

This time of year was my favorite season in Colorado and I have found myself reminiscing a lot lately.  I keep asking myself, “Why did we move?”.  I miss the weather!  I miss our first house!  I miss our friends!  I miss EVERYTHING!

So, why did we move?

I thought we moved for selfish reasons, but the more I think about it, the more I realize they weren’t (at least not entirely).  I am not a selfless person by any means, but the reason we moved back east is clear to me every time I watch Dylan with his aunt, uncles, and grandparents.  We moved for him.  I mean, we now have the added bonus of a family support system, but we were not without somewhat of a support system out west.

That being said, I know it is possible that someday Dylan will ask me why we ever left Colorado.  He may want to move back and not understand how this could have been for him.  If so, it will be because he has romanticized the idea of living somewhere foreign to him.  I think this because those were my questions with regards to why my parents left Boston.  Surely Boston was more exciting than New Jersey!

In retrospect, my New Jersey childhood with grandparents and family nearby was amazing!  I was so spoiled and I had no idea!

Becoming a parent has given me a new perspective into the decisions of my parents.  I still don’t understand every decision they made, but I’m sure that will change over time.

My dad once told me, “No matter how much we drive you crazy now, one day you will be just like us.  Every person becomes his/her parents in the end.”.  I don’t agree 100% percent with that statement, as I think one can avoid making some of the mistakes his/her parents made (i.e. I do not believe that someone who grew up with an addict must become an addict someday because, ultimately, each person retains the responsibility for his/her own life).  I do, however, believe I will raise Dylan in a very similar manner to the way I was raised.  In the words of Savage Garden from their song Affirmation, “I believe your parents did the best job they knew how to do” and, for the most part, my parents’ way is the best job I know how to do.  Wish me luck! 😉 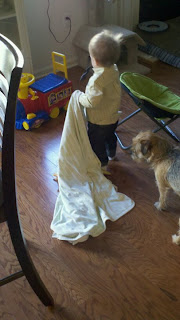 If you enjoyed this post, please consider leaving a comment or subscribing to the RSS feed to have future articles delivered to your feed reader.
0 Shares
« Do I Have An Accent?
Dear Heidi »